Jeton has brought the art of the gentleman juggler back to the international stage. His performances are not only appreciated by his audiences, but have also received recognition from circus and variety experts in the shape of the following awards:

Gentleman Juggler Jeton has appeared in countless show productions in Europe, Asia, Australia and the U.S. He is just as much at home on stage as in the circus ring, and audiences are always hugely impressed ... more

Jeton has featured in numerous international festivals, films and TV productions as a show performer, a guest on talk shows, an expert speaker or an actor ... more

Jeton is an elegant entertainer whose roguish charm and inimitable feats make him a sought-after guest at gala shows, 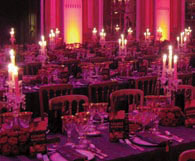