Popular entertainment in the Golden 1920s was largely shaped by the many variety theatres that existed at the time. Very often topping the bill were the so-called gentleman jugglers. Elegantly attired, they would saunter onto variety stages to perform immaculate juggling and balancing feats with everyday objects. The most famous of them bore resonant names like Kara, Salerno or Adanos. Yet the gentleman juggler as a type would surely have long been forgotten if it were not for Jeton, a new master of the art.

The encyclopaedic 4000 Years of Juggling describes Jeton as one of the “top level newcomers to juggling in the new millennium”. In 2013, in Ohio, USA, he became the first German performer to receive the Award of Excellence from the International Jugglers’ Association (IJA) in recognition of his unique work. This award is regarded as the Oscar of the juggling world, and is presented by the IJA to jugglers who have made an outstanding contribution to shaping this art form. It is hardly surprising, then, that he is invited to perform all over the world, and in front of such illustrious spectators as Queen Margarete II of Denmark. Yet Jeton’s success can be measured not only by his prestigious references, but also by the enthusiastic response that his performances receive, and the memories that his winning personality leaves behind.

Right from the very beginning of his career as an artist, Jeton already had a very clear conception of how his act should look, a conception which he has consistently followed, turning it into reality step by step. It is a passion which expresses itself in the meticulous care and the loving attention to detail with which he combines juggling, balancing and music to form a harmonious whole.

His sophisticated ball juggling is impressive not only for the sheer dexterity, but also for the mischievous charm with which he presents it. The man-about-town nonchalantly tosses the accessories of elegant society around, fascinating audiences as he whirls a large wall mirror through the air, and amazing them with his signature balance with two billiard cues.

For the grand finale, Jeton serves up yet another highlight, humorously flipping coffee cups and saucers from the tip of his toe to the top of his head. A feat that never fails to warm the hearts of young and old alike.

His artistic ability and his likeable personality are bound to captivate every kind of audience.

Glory & Misery of the Golden Twenties

The 13th edition of the “Festival International de Magie” in Andrézieux – Boutheon had started well. more

Glitz & Glamour at the Gourmetpalast

Two years after his first guest appearance at the Gourmetpalast in Heilbronn, Monsieur Jeton was back for a reprise. more 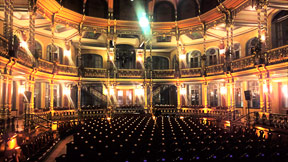 In its 29th edition, the Varieté am Seepark presented a show with international artists and ... more