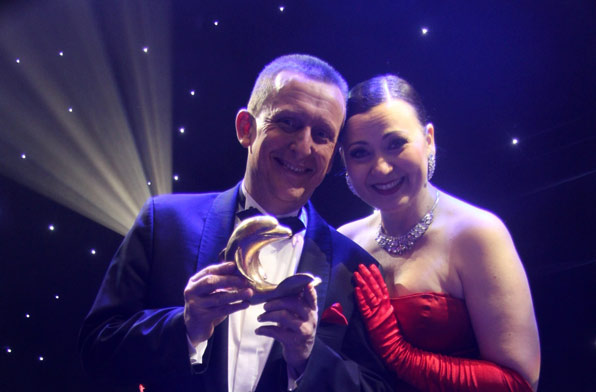 The 13th edition of the “Festival International de Magie” in Andrézieux – Boutheon had started well. Everyone was ready for the dress rehearsal on Friday 13 March when the French government announced the measures to fight the Covid-19 epidemic: all theatres with audiences of more than 100 people would have to close. It came as a blow for the organisers and artists. After a short time, though, they decided to at least hold one more show, this time for only 46 spectators, attended by all the volunteers, the organising team and representatives of the city. It was a liberating atmosphere and thanks to the enthusiastic performances of all the artists it turned out to be a great evening in the end. Monsieur Jeton was especially happy to receive the golden “Magic Dolphin” award to take home as a souvenir. 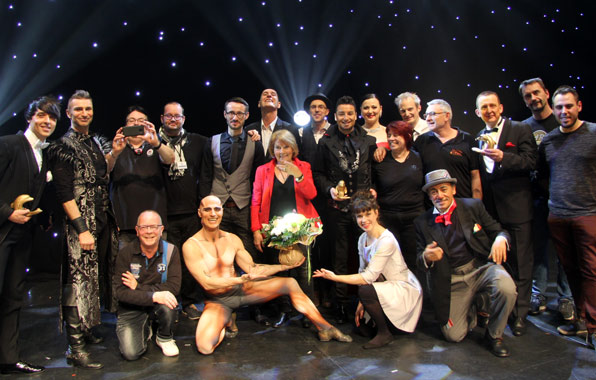 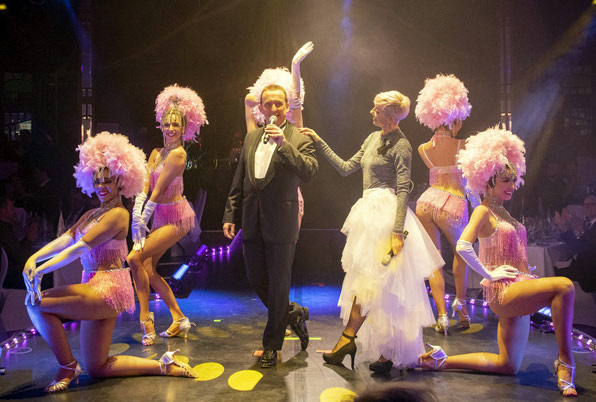 Two years after his first guest appearance at the Gourmetpalast in Heilbronn, Monsieur Jeton was back for a reprise. This time he not only presented his unique juggling skills, but also hosted the show, accompanying the audience through an evening of glamour and a delicious four-course dinner. Both the audience and the press were enthusiastic about the new creations of the star chefs Hans-Harald Reber (Reber’s Pflug, Schwäbisch Hall), Thomas Wolf (Landhaus Wolf, Schwäbisch Hall), Jürgen Koch (Laurentius, Weikersheim) and Benjamin Maerz (Restaurant Maerz, Bietigheim-Bissingen) and about the high-class entertainment programme. All eyes were on Monsieur Jeton, who not only impressed with his tricks, but also compered the evening with wit and charm. To get a taste for yourself, watch this video trailer. 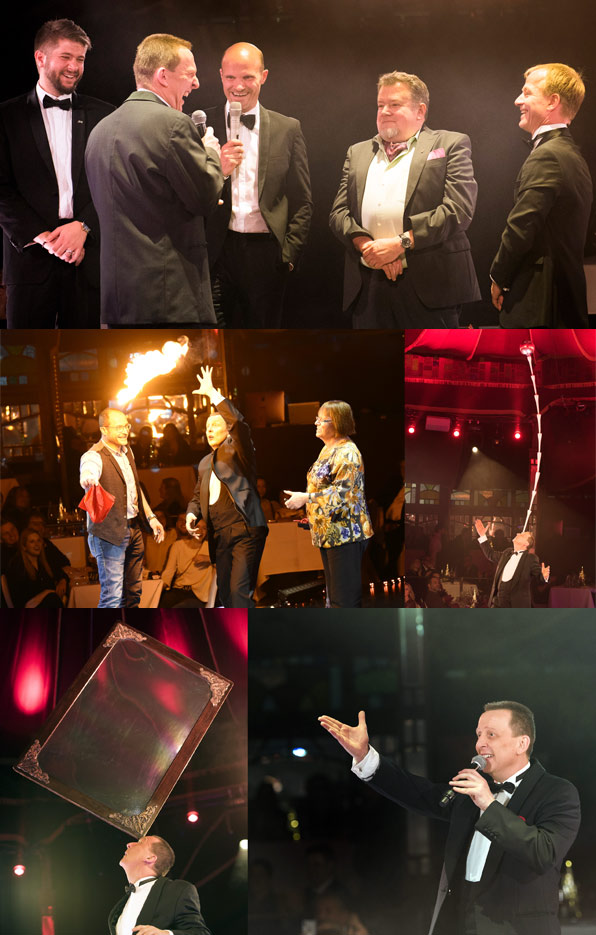 His head still spinning from the many wonderful experiences at the Gourmetpalast, Jeton went straight to his next engagement. Under the titles “Viva Varieté 2020” and “Sterne des Varietés - Artisten von Weltrang” (Stars of Variety - World-Class Artists) he spent several days in the Kulturforum Friedrichsdorf and in the Hugenottenhalle in Neu-Isenburg. The press were full of praise for his performances:

‘The man of the world wears a tuxedo and a bowler: With relish he lights a cigar, balances his walking stick and hat on the tip of his right foot and suddenly tosses them into the air. As if nothing could be more natural, the walking stick and hat land upright on the lit cigar, to the amazement of the audience. The compere introduces himself as Gentleman Juggler Jeton. At the Viva-Varieté-Show in the almost sold-out Forum Friedrichsdorf, this exceptional artist is our charming and witty host for the evening.
He goes on to perform one astonishing feat after another in a style evoking the 1920s. Back then, jugglers were famous for using everyday objects as props. Two billiard cues are now balancing on his chin, with a billiard ball on top. Later, he’s carrying a stack of four cups and saucers on his head. Each item of crockery got there by being kicked up from the tip of his toe. And as if that were not enough, into the top cup, also propelled by his foot, go a sugar cube and a teaspoon.’
(Taunus Zeitung 22.1.2020)

‘With cane and cigar and at least as much charm as John Steed in the 1960s British TV series “The Avengers”, Gentleman Juggler Jeton, in his capacity as MC, opened the proceedings and introduced a colourful troupe of artists. After generating a lot of ooh’s and aah’s with his ball and mirror juggling, he was visibly pleased to announce...
...before Jeton shone with some more sophisticated juggling. This time he had got his hands on the good china: he stacked 4 cups and saucers on his head, propelled up there from his foot, rounding it off with a teaspoon that landed in the top cup. “Some will wonder how he does it - others may wonder why he does it” was one of his cheerful, self-ironic comments. And turning to the children, he jokily recommended: “Don’t do this with mum’s crockery… go to granny’s kitchen instead.” The compere was in an equally good mood when he opened the second round after the intermission...
Magic was in the air when Jeton, with the help of two volunteers from the audience, made a banknote disappear, only to have it miraculously reappear from inside a lemon.’
(Friedrichsdorfer Woche 23.1.2020)