In the summer months, Monsieur Jeton will be touring on various American cruise ships with his full-length show…

On 29.05.2018 Monsieur Jeton will be back at the forum of Hesse’s Ministry for Social Affairs and Integration with his show “The shell game and other games of chance”.

From St. Etienne to the Capitol and on to the legendary Café Hahn (March 2018)

Spring arrived, and with it some wonderful guest appearances. In Ludwigsburg Monsieur Jeton compered a variety show for the local savings bank, where he had the honour to introduce guest star Nicole, the first German winner of the Eurovision Song Contest. 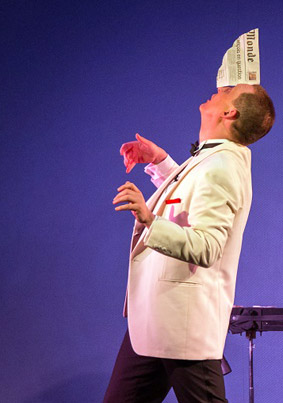 A few days later Jeton was booked by the French bank Crédit Mutuel as Gentleman Juggler for an event in St. Etienne, where he surprised the audience with his linguistic skills and his outstanding balancing tricks.

Audiences of the Neue Philharmonie Frankfurt can be sure of an intensive experience of great classical music. On 18 March, under the baton of guest conductor Steven Lloyd Gonzalez, they gave a concert entitled “MeisterFeier” (“Celebration of Champions”), combining the great sporting anthems with moving images. For example, the audience saw original footage from the 1954 World Cup Final in Bern’s Wankdorf Stadium, fencers from the Offenbach Fencing Club, and Gentleman Juggler Jeton, who had created a special choreography based on the Sport Polka by Josef Strauss. 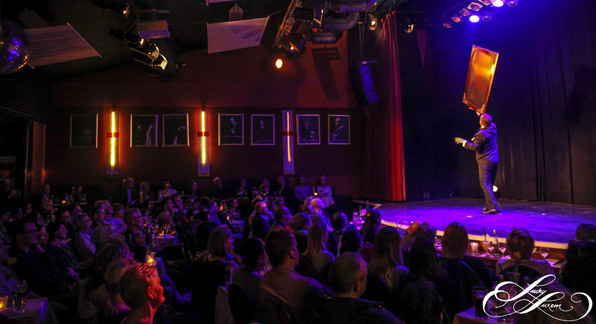 From 21 March until 2 April, in the legendary Café Hahn in Koblenz, well crafted words and poignant prose came together with rare gems from the world of variety. It was an exciting liaison of chic, class and a touch of glamour – and in the midst of it all, the grand master of sophisticated entertainment: Monsieur Jeton.
The headline in the Rhein-Zeitung read: “Easter variety show in Café Hahn surprises us with artistry and verbal wit”. The reviewer continued: “Monsieur Jeton, a little man with a bowler hat, who looks like he’s just escaped from a black and white film, balances everything he can get hold of: on his forehead, on his head, coffee cups and billiard cues. The audience are impressed, but it’s the juggler’s witty remarks that make them laugh.”